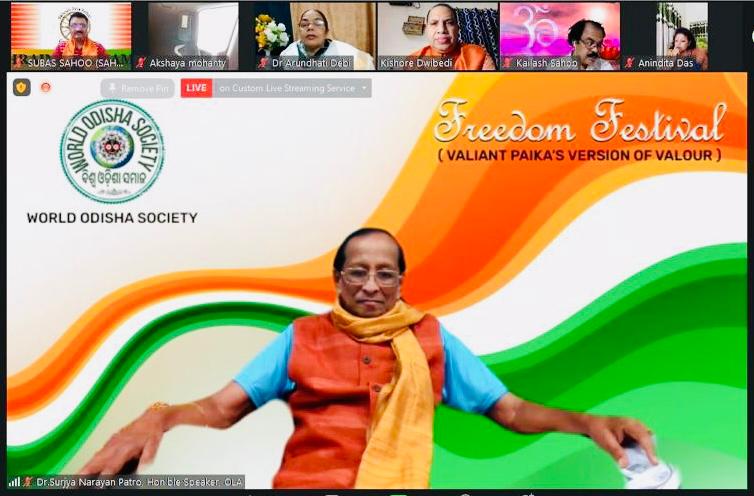 North Carolina/ Rhodes Island /Manches Odisha played a vital role in Indian freedom struggle, described by distinguished speakers. Participating in the online midnight International Freedom Festival hosted by World Odisha Society (WOS), the honoured guests and leaders of Odia Samaj of various countries unanimously eulogised the significant contribution of Odisha during freedom movement and building modern Indian Nation after independence. Entitled the ‘Valiant Paika’s Version of Valour’, the eight hours long Mega Celebration was inaugurated by the Speaker of Odisha Assembly Dr. Surjya Narayan Patro. Addressing the gathering through video Conferencing Dr.Patro underlined that the worldwide Odia and Indian Diaspora have always been emotionally attached to their Place of Birth. Dr. Patro sought the help, Co -operation and Support of NRIs and NROs in the process of building a vibrant Odisha and super powerful India. Presiding over the webinar Chairman of World Odisha Society Kishore Dwibedi pointed that the sole goal of WOS is to establish the excellence of Odisha in World arena.

Speaking in the virtual session the Guest of Honour Former Union Minister and son of Former Prime Minister Lal Bahadur Shastri, Sunil Shastri hailed the exceptional merit and outstanding talent shown by Odias in various fields branding them as jewels of the nation. Endorsing the Paika Mutiny as the First War of Independence of the country, Shri Shastri elaborated on the exemplary contribution of Odisha in enhancing the glory of the Country.

Delivering the freedom speech at Midnight, the Chief Speaker M.P. of Kenya Dr. Swarup Ranjan Mishra, stressed that the history and heritage of the country has recognised the golden legacy of the Odias. Dr. Mishra gave a Clarion call to Odia community across the globe to prove their mettle and excellence in the field of education as the modern age valiant Paikas to conquer the world.

Distinguished Guest Odisha’s I.T., Sports and Youth Affairs Minister Tusharkanti Behera appealed the younger generation to get inspiration from the idealism and sacrifice of Jayee Rajguru and Baxi Jagabandhu. President of Harijan Sevak Sangha Sankar Kumar Sanyal stressed on the priority of transmitting rural economy into self reliant. Vice – Chancellor of SOA University Dr. Ashok kumar Mahapatra, warned the citizens to be vigilant about both the internal and external forces acting overtime to weaken our precious democracy. Articulating that the Indian Freedom earned through peace and non – violence, principal Commissioner of Income Tax Manoranjan Panigrahi rated it as the rarest in the World history. Chief Editor of Paryabekhyak Pabitra Mohan Samantaray emphasized on the need to introspect the progress and hindrances during the Journey of last Seventy Five Years of Independent india. Advisor of WOS Dhirendra Kar highlighted the special role played by Mahatma Gandhi to Baji Rout during the Freedom stuggle.

Director of IIPM Dr. Arundhati Debi mentioned that the real objective of Freedom can only be achieved when the rolling tears of the poorest person of the country can be evaporated. Citing that the Heroic history, heritage and rich art, culture, architecture and trade of Odisha, have not been promoted and propagated properly, Chief Editor of The Common Times Satyajit Mohapatra exudes confidence that the WOS can now foot the bill. Declaring that the Odias of whole World are now united, renowned Film Maker Jitendra Mishra asserted that we will definitely attain Number One Position. Opining that the history and Literature are interrelated, the Secretary of Odisha Sahitya Akademi, Prabodh Rout sought the co –operation of WOS during the Amrit Mahotsav Celebration by the Akademi. Cinestar Sabyasachi Mishra assured fullest support to WOS in its noble endeavour to ensure all round prosperity of Odisha.