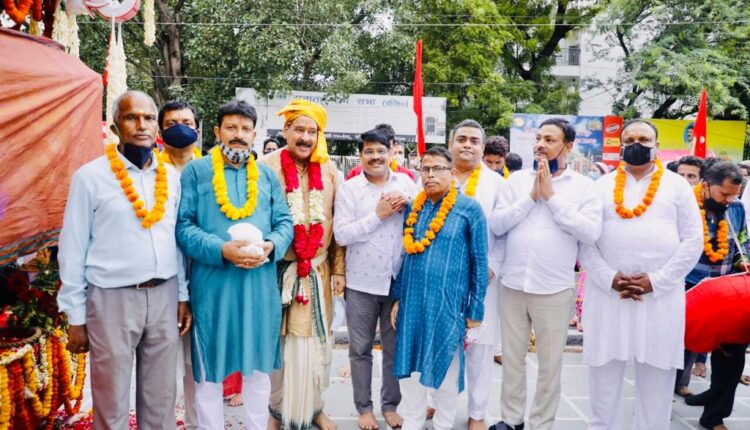 ODISHA NEWS TODAY BUREAU:
43rd Bahuda Yatra Festival celebrated at the main Jagannath Temple of the National Capital Region at Hauz Khas Village in New Delhi amidst devotional and spiritual fervour. The managing body of the temple Sree Neelachal Seva Sangha kept this year’s celebration at a symbolic level observing the covid restrictions strictly. Commencing from in the afternoon all the religious rituals were performed in a solemn and ceremonial manner. At about 4:30 pm the four deities were taken in Pahandi procession from Aunt’s house to the aesthetically and colorfully decorated chariot. The entire atmosphere got reverberated with the chanting of hymns, roaring of slogans like haribol and Jai Jagannath, sounding of Hulahuli, blowing of conch and playing of musical instruments such as Ghanta, Kartala, Mardala, Jhanja and Mrudanga. Around 500 devotees participated in the Simple ceremony and had a holy Darshana of the Deities from the chariot. The cooling down of capital’s temperature due to heavy downpour in the morning and drizzling in the afternoon made the climate, pleasant and perfect for the participants in the car festival. Renowned philanthropist and secretary of Sree Neelachal Seva Sangha Rabindra Nath Pradhan conducted the traditional service of sweeping before the Chariots called Chhera Pahanra. After that the chariot was pulled till 500 metres in the grand road and then was returned back to the premises of the temple. The deities remained on the Chariot for Public Viewing till Late Evening. At around 9:30 pm in the night all the four Deities were taken to the Natyamandap of the temple and were stationed there. The Lords and goddess will remain there till the day of Niladribije on 23rd July 2021, informed by temple administration sources. The highlight of the festival was the devotional discourse by Pandit Bhagirathi Jha on the Miraculous Stories of Lord Jagannath.
The special attraction of the Evening was the musical programme presented by Sangeeta Biswamohan and Sura Mallhar. Noted vocalists like Santosh Rout, Dillip Mallick, Sushant Parida, Dibya Lochan Behera, Biswajeeta Panigrahi, Abhipsa Rath, Sagar Jena, Sushant Pradhan, Rudra Mohanty, Debi Prasad Panigrahi and Sital singh have enthralled the audiences with their Soul Soothing recitals of devotional songs. Subodh Padhi, Suresh Bhatt, Debadutta Prusty and Bijay Viswakarma provided musical support.
The Entire proceeding of the Bahuda Yatra was livestreamed in Facebook.
The whole arrangement was smoothly managed by the able and active stewardships of the Secretary of the managing Committee Rabindra Nath Pradhan, Vice President Gajendra Prasad Samant, Treasurer Pankaj Mohanty, Member Jeetendra Mohapatra, Khirod Patra, Ajay Pradhan, Ashok Pradhan, Amulya Ojha, Abhiram Sutar, Rankanidhi Sahu, Nisidh Kumar Das and the Manager of the Temple’s office Rashmiranjan Behera. The Prominent personalities present were Deepak Rath, Gobardhan Dhal, Sushant Das and Kedar Tripathy.

Demand For Studying Abroad Is On High