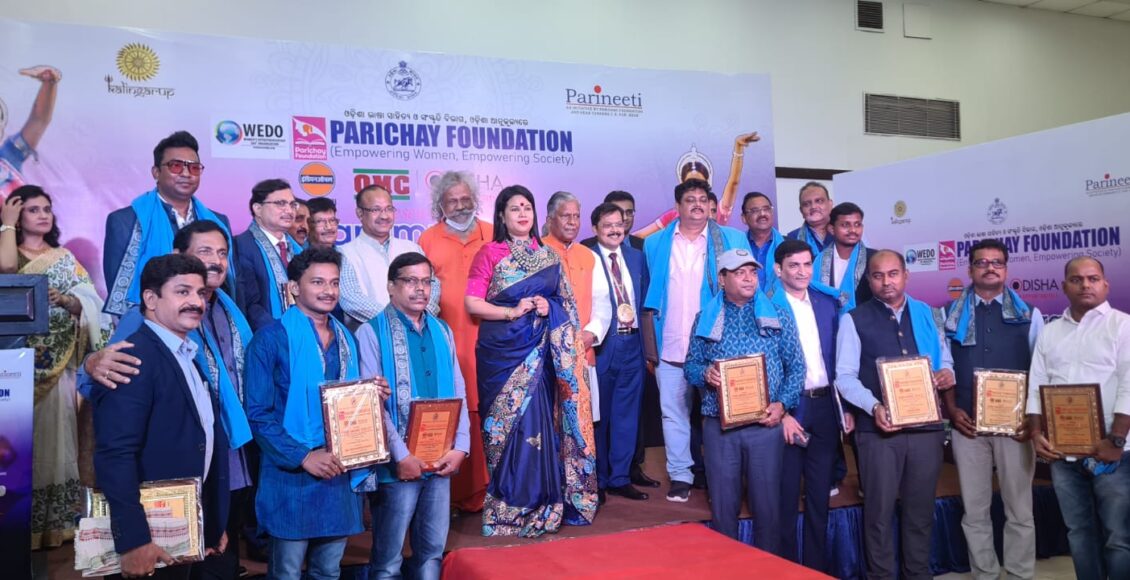 Seventh ‘Parampara’ and the Fifth ‘Shri Award’ by the Parichay Foundation

New Delhi: Parichay Foundation organised its signature events, the 7th edition of ‘Parampara’ and 5th edition of Shrie Awards, at Constitution Club, New Delhi on October 9. While Parampara celebrated the guru-shishya tradition with an enchanting performance by Odissi exponent Guru Sujata Mohapatra and her disciple, daughter Preetisha Mohapatra and witnessed felicitation of achievers from different fields, Shrie Awards exclusively brought together men achievers under one platform.
The event started with a musical performance by eminent playback singer Ms. Lopita Mishra. In keeping with its objective to promote art and culture, the event also witnessed an exclusive ethnic fashion show by ‘Parineeti’ and ‘Kalingarup’ (the handloom chapters of Parichay Foundation) that highlighted the efforts of weavers of Odisha as members of the foundation walked the ramp showcasing Odissi handloom with elan. The Kalingarup round saw the members flaunting Odissi sarees which was coordinated and planned by Rupashi Wadhawan, the Parineeti round, which witnessed the members in fusion wear, was coordinated by Rashmi Panda, a beautician by profession from Odisha, who donned the role of a designer for the cause.
Later, Guru Smt Sujata Mohapatra and her daughter gave an enthralling performance, paying a befitting tribute to the age-old teacher-disciple tradition by showcasing a beautiful Odissi guru-sishya theme “Parampara” that kept the audience hooked to their seats.
The event was attended by Shri Jyoti Prakash Panigrahi, Hon’ble Minister of Tourism, Odia Language, Literature and culture, Dy High Commissioner of Sri Lanka H.E. Niluka Kandurugamuwa, Shri Ashok Bajpai, Hon’ble Rajya Sabha MP, UP, Dr. (Prof) Prasanna Kumar Patasani, Former MP, Shri Priyadarshi Mishra, Chairperson of OSHB, Shri Amarendra Khatua, Former Ambassador, Shri S. K. Verma, Sr Advocate, Supreme Court.

Talking about the event, Founder, Parichay Smt Rosalin Patasani Mishra said, “I am overwhelmed with the support that came for the event despite the pandemic situation. I want to thank everyone associated with the event, the team, the sponsors and partners, the eminent guests who took out time from their busy schedule to attend the event, the audience who came in large numbers and the media. My special ‘pranaam’ to Guru Sujata Mohapatara and her daughter and I also want to thank all the members of the Parichay family who participated in the fashion show for a cause. I want to congratulate all the awardees and thank them for attending the event physically from different parts of the country. An event in Delhi is always close to my heart since I started my journey from this city and I am grateful to my parents, my sons and my husband who have been my rock solid support system in this journey of over 12 years.”
A philanthropic organisation, Parichay Foundation has been engaged in bringing about economic and social upliftment for underprivileged in urban and rural slums of Odisha and Delhi, particularly working towards women empowerment and welfare. That apart, Parichay has also been consistently making efforts to promote Indian art and culture.