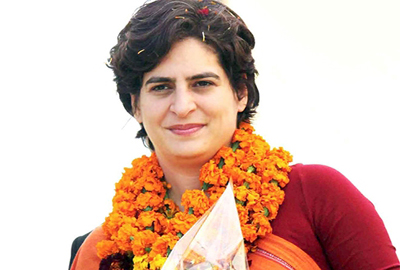 Priyanka’s formal entry into politics drew reactions from political parties across the spectrum.
Bharatiya Janata Party (BJP) spokesperson Sambit Patra said: “I congratulate Congress for announcing that Rahul has failed. They have done this by elevating Priyanka Gandhi. We are witnessing how Congress is going out of favour in various states. Congress is focused only on one party.”

Speaking to News18, Union Minister Babul Supriya congratulated Priyanka but added that it was a move made by the Congress to “help support” Rahul Gandhi. Supriya added that the development proved Congress’ approach towards dynastic politics.

National Conference (NC) chief and former Jammu and Kashmir chief minister, Farooq Abdullah told News18, “Thrilled that she is entering electoral politics. Hope she will contribute to politics. We extend our best wishes to her. She is like her mother (Sonia Gandhi) and grandmother (Indira Gandhi). The people of India want her to help the party, and help her brother.”

“Both Priyanka and Rahul will prove to be a great help to the Opposition,” Abdullah added. NC is an ally of the Congress.

BJP MP and General Secretary for Karnataka Shobha Karandlaje said, “When clown Prince is failing consistently, princess makes her entry! Congratulations Priyanka Gandhi On your appointment as Gen Secretary of East UP.”

Speaking to news agency ANI, Senior Congress leader Motilal Vohra said, “The responsibility given to Priyanka ji is very important. This will not only have an effect on eastern Uttar Pradesh but also other regions.”

Congress Member of Legislative (MLA) Deepak Singh told ANI, “We are happy Priyanka Gandhi is joining. It’s very clear now Rahul Gandhi is about to become the prime minister and Modi is about to go.”