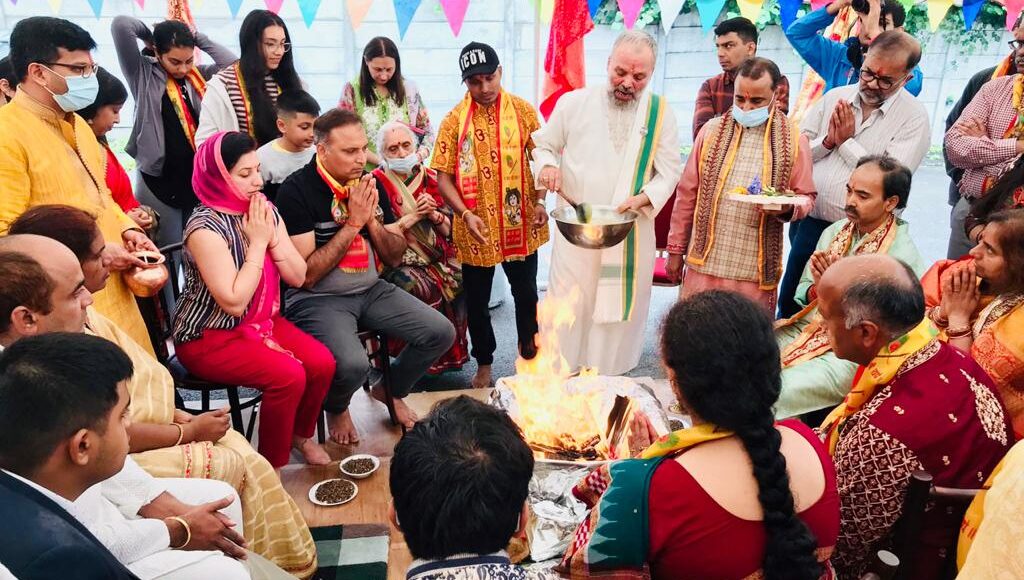 Odisha News Today Bureau:
The second largest city of United Kingdom (UK), Manchester on Saturday witnessed the installation ceremony of the Biggest GOD of the Planet, Lord Jagannath amidst pomp and splendour. The religious rituals of Pujarchana, Kalas Yatra, Dev Pujana, Abhishek, Murti Sthapana and Prana Pratishtha commenced in the morning with pious and spiritual fervour. The detail proceedings of worshipping were performed in a solemn manner as per Hindu scripture in front of the four deities, Lord of the Universe Shree Jagannath, His Elder Brother Lord Balabhadra, His Sister Goddess Devi Subhadra and Lord Sudarshan. To mark the auspicious occasion the entire structure of Gita Bhawan Hindu Temple at 231, Withington Road, where the Gods and Goddess are presently stationed has been decked up with different hues of colours. In the afternoon around 12.45 to 1.45 p.m. the Nama Yagna, Homo, Bhoga, Maha arati and Pushpanjali programmes were conducted before the deities under the guidance of Priests Acharya Medinipati Mishra of Glasgow Hindu Temple and Acharya Shyam Sunder Sharma of Gita Bhawan. Nearly Five hundred Odia and Non- Odia devotees alongwith their families congregated to witness the much sought after spectacular ceremony. At about 2.30 p.m. the deities were taken in Pahandi procession to the aesthetically and colourfully decorated chariot parked inside the premises of Gita Bhawan. The Chariot was constructed and decorated under the guidance of Jeeban Panigrahi, Bishnu Dash and Prasanta Sahu. The atmosphere got reverberated with the recitals of hymns, roaring of slogans like haribol and Jai Jagannath, sounding of musical instruments like Kartala, Mardala, Jhanja and Mrudanga. The majestic and magnetic view of the Supreme Saviour of mankind from the magnificent Chariot was unique and ethereal. The assembled Indian and foreign devotees had the holy glimpses of the Deities on Chariot, which is treated as most sacred act in hindu religion.

Dr. Siba Senapati undertook the traditional services of sweeping on the chariot called Chhera Pahanra. Around 2.30 p.m. amidst the devotional renderings of kirtan, recital of Bhajans, Jananas, the chariot was pulled till two miles distance to Alexandra Park in the city and then pulled back to the temple premises. The unique and unusual scenery of the Royal sojourn of Lord of the Universe on rolling chariot passing through Withington Road, Wilbraham Road, Bantingham Road and Alexandra Road South was just marvellous and mesmerising.

Earlier the four wooden deities made out of Neem tree were carved to their present shapes in puri and were specially couriered to Manchester. The trustee of Hindu Cultural Society, the Founding and Managing body of Gita Bhawan, Raj Kumar Kaushal extended his full co –operation and support for the installation of Lord Jagannath at Gita Bhawan.

The Deities were offered Prasad in the evening diligently prepared by the ISKCON team. The assembled devotees also had the pleasure of parcating the delicious Prasad having the flavour of Abhadas of Anand Bazar in Puri. With the installation of Four deities at Manchester, the long cherished dreams of the Odia residents of north West England have been accomplished, expressed the main organisers and noted Jagannath devotees Dr. Siba Senapati and Smt Rekha Senapati. The other organisers who played a vital role in successfully organising the installation ceremony and Car Festival include Jeeban Panigrahi, Durgesh Nandini, Prasanta Sahu, Roseleen Biswal, Bishnu Dash, Sushri Mishra, Siba Ranjan Biswal, Pooja Khandual.

Presentations of scintillating cultural shows by celebrated artistes were also part of the celebration. These include recitals of devotional songs by Nirushree Nirlipta Mohanty and Drishika Panigrahi, Bhartanatyam dance performance by Nritya Ram Mohan and Odissi dance recital by Elena Evelyn and Gracy Aurora.