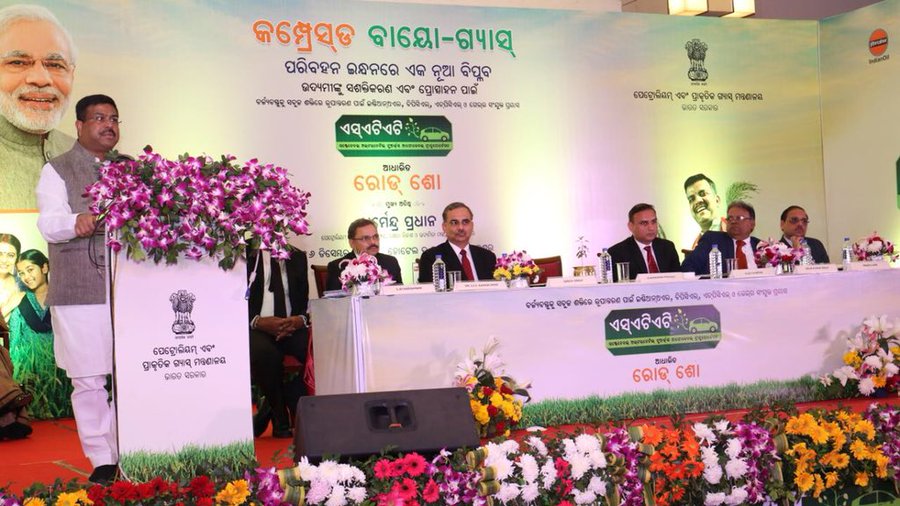 IndianOil kicks off Roadshow on SATAT initiative at Bhubaneswar

The SATAT initiative aims to boost availability of more affordable transport fuels, better use of agricultural residue, cattle dung and municipal solid waste besides providing an additional source of revenue to farmers. As part of SATAT, the OMCs invited Expression of Interest (EOI) to procure Compressed Bio Gas (CBG) from potential entrepreneurs and make available CBG in the market for use as automotive fuel. Under the initiative, it is envisioned that 5000 CBG plants would be established across the country with an estimated annual CBG production of 15 million tonnes by the year 2023.

CBG introduction in transport sector has multiple benefits such as waste management, reduction in carbon emissions, additional revenue source for farmers, boost to entrepreneurship & rural economy by generating employment opportunities. It is estimated that if the total potential of CBG is exploited in the country, India can produce approx. 62 million tonnes equivalent of CBG annually which is sufficient to replace the entire gas demand of the nation.

Sri Sanjiv Singh, Chairman of IndianOil Corporation Limited in his welcome address said that under the leadership of MoPNG ‘SATAT’ a transformational initiative in the green energy space was launched on 1st October, 2018 at New Delhi with an aim to revolutionize transport sector by introducing Compressed Bio Gas (CBG) in this segment. It will further help India achieve self-reliance in the energy sector by enabling the country in drastic reduction of its crude imports which currently constitute over 80% of its total energy consumption.

In this occasion Honorable Minister Sri Pradhan said that CBG can be produced from various types of feedstocks such as agriculture residues, press mud & spent wash of distilleries, sewage water, Municipal Solid Waste (MSW), cattle dung, biodegradable fractions of industrial waste etc. CBG is replacement of Natural Gas and can be used in the transportation sector in place of Compressed Natural Gas (CNG). Presently, consumption of Natural Gas in India is around 140 MMSCMD out of which domestic production is only 70 MMSCMD and remaining 70 MMSCMD is imported which is around 50% of total consumption. Government intends to move towards Gas based economy by increasing the share of Natural Gas in India’s energy basket from present 6-7% to 15% by the year 2022. With the rising demand for Natural Gas in transport & industrial sector, CBG has been identified as a potential route. In order to promote CBG production in the Country, an innovative initiative was launched by MoPNG on 1st October, 2018 at New Delhi i.e. ‘SATAT’- Sustainable Alternative Towards Affordable Transportation.

Under this initiative, IOC, BPCL, HPCL & GAIL have invited Expression of Interest (EoI) to procure CBG from potential entrepreneurs and create necessary infrastructure for marketing the same as automotive fuel. While IOCL, HPCL, BPCL have already done so, GAIL will float EOI on behalf of GAIL and its CGD JVs.

Before launching ‘SATAT’ initiative, MoPNG has travelled a long journey and touched many mile stones in Biofuels. These initiatives will help in achieving global commitment for Green House Gas (GHG) reduction and achieving the goal of Swachh Bharat Mission. To sensitize the stake holders OMCs have already conducted Road shows in Chandigarh, Lucknow and Pune. In all these cities, OMCs have received