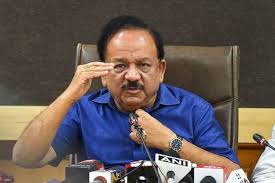 Next two and half months are going to be crucial, says Harsh Vardhan on Covid-19

Union health minister on Friday said the next two and half months are going to be crucial in India’s fight against Covid-19 because of the festival season and winter. The minister was chairing a meeting with the heads of autonomous institutions under the department of Science and Technology and CSIR to review the Covid-19 preparations.
“We are now entering into the 10th month of our fight against COVID-19. It was on January 8 when we had our first meeting of the expert group. Since then, the journey has been relentless. But today, we can proudly say that we have created significant infrastructure for our fight against coronavirus,” the minister said.
Unless a vaccine comes — which the minister said will happen soon as one vaccine candidate is at stage 3 trial and the other two are at stage two — social vaccines of precautionary measures need to be followed, the minister said.
On Friday, India’s tally went up to 7,370,468 with 63,371 fresh cases recorded in the last 24 hours. However, India’s recovery rate is the highest in the world and the fatality is among the lowest, the health ministry has said.
The minister has earlier warned of a spike in the number of cases during winter. “SARS Cov 2 is a respiratory virus and the transmission of respiratory viruses is known to increase during the colder weather. Respiratory viruses thrive better in cold weather and low humidity conditions. There is another fact that needs to be kept in mind. During winter, there is a tendency of overcrowding in residential dwellings which may increase transmission… So in Indian context, it would not be wrong to assume that the winter season may see an increase in the number of cases,” Harsh Vardhan had said earlier.