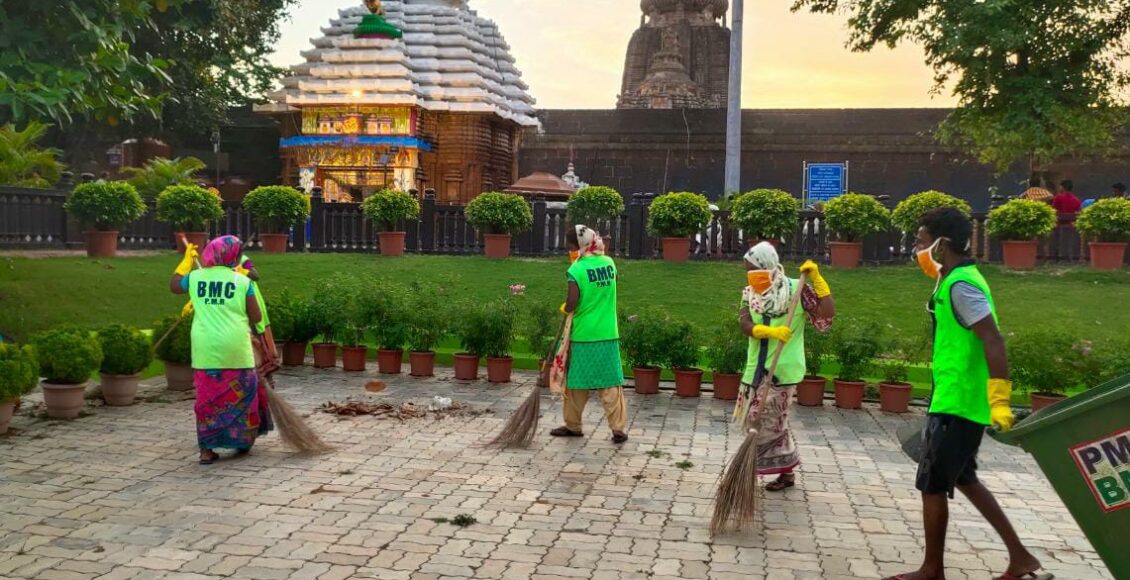 Odisha News Today Bureau:
The second wave of the COVID pandemic has affected work in many sectors. In addition to COVID, natural calamities like very severe cyclonic storm Yaas and the deep depression during the onset of early monsoon rains have acted cumulatively in Temple City Bhubaneswar, but the sanitation staff (Safai Karmacharis) of Bhubaneswar Municipal Corporation (BMC) and its three major sanitation agencies have been dedicatedly attending to Sanitation Duties across the city in 67 wards, without fail.While there are 571 sanitation staff under the 10 BMC managed wards of the city, in the rest 57 wards through three sanitation agencies, the biggest urban local body of the State has engaged 2,610 sanitation workers or ‘Safai Karmacharis.’ BMC has engaged 232 vehicles transporting the municipal solid waste (MSW) generated across the State Capital. At first, the MSW from different wards is transported to the temporary transit station near Sainik School and then, the same is despatched to the Bhuasuni Dumping Yard on the outskirts of the city near Daruthenga. Sources at BMC also informed that in a single day the city generates around 520 tonnes of MWS.
Manas Nayak (33) from Old Town area, who works as a Safai Karmachari in the Lingaraj Market and Park area says “I take pride in working as a sanitation worker and also in contributing towards keeping the area around the Lingaraj temple clean. It makes me happy.’’
Sanitation worker Indra Naik (38), a trolley puller of MLA Colony area of Unit 4 in the city is happy to be contributing towards the city’s cleanliness. “We feel proud when the city gets a good position in a national ranking and especially when it became the No1 City of India in the Smart City challenge. I hope people should become more responsible and act smartly in keeping our city clean.’’
Geeta Naik (35) a sweepress in Unit IX area of the city, says “people understand the amount of efforts and dedication we put in to ensure that the surroundings of the city remain clean and green.”
President of Residents Welfare Association, Kalunanda Nagar, Pokhariput, Nrupa Kishore Patnaik says “the sanitation workers have become a part of our daily lives. If a person couldn’t come due to illness or leave on a particular day, we also enquire about him/her as they are working for us throughout the year enthusiastically, even during the COVID-19 pandemic.
“Sanitation Workers are our primary workforce. We have vaccinated our frontline sanitation workers in the very first phase of the Vaccination drive, way back in February this year. BMC is committed to providing them with requisite personal protective equipment as well as safe working conditions, so that they can serve the city well,’’ said BMC Commissioner Sri Sanjay Kumar Singh.

Meanwhile, BMC has started its segregated waste collection initiative. While 16 micro composting centres (MCCs) are now functional in different wards of BMC’s three administrative zones, presently on an average, more than 4 tonnes of segregated waste is being processed at each of the MCCs per day, though capacity of each MCC is around 5 tonnes per day (TPD). In total, waste collection of 16 functional MCCs is around 70 TPD.
Partitioned waste collection vehicles branded as ‘Safei Gadi’ s’ are moving around the wards in morning hours to collect waste. Swachha Sathis are engaged for mobilisation and awareness through jingles played on public address system of each vehicle along with community counselling. More MCCs are in the pipeline across the city to minimize waste generation and recycling of wet waste and to convert them to manure through composting.

Nine sanitizing vehicles are working in tandem (three in each administrative zone) to sanitize the common areas of the city through spraying of1 percent solution of Sodium Hypochlorite. Each sanitizing vehicle is managed by three staff and the Sanitation Experts of BMC under the respective administrative zone. Areas reporting increased number of COVID positive cases and major public places like hospitals, crematorium and market places are on the priority to be covered by these vehicles.