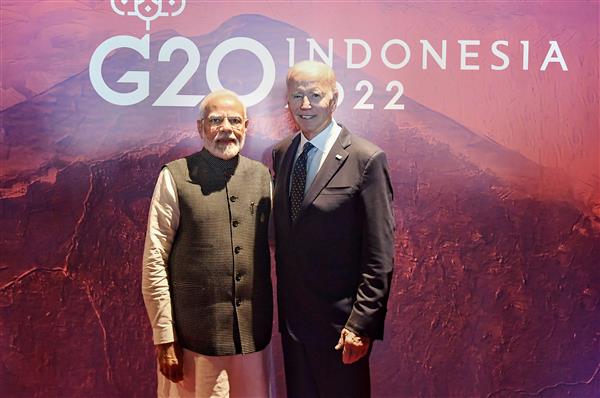 India’s Prime Minister Shri Narendra Modi is currently on a 3-day visit to the island of Bali, Indonesia for the 17th G20 Leaders’ Summit. The Prime Minister tweeted his greetings to the people of Indonesia in the Indonesian language as he reached the world’s largest archipelago. PM Modi received a warm welcome in traditional Balinese style as he arrived at Bali airport.
On Day 1 of the 2-day Bali Summit, Prime Minister Narendra Modi attended the 1st Working Session on Food and Energy Security. In his intervention, he underlined the criticality of resilient supply chains for food, fertilizers, and energy. He also highlighted the need for affordable finance for a smooth energy transition for the Global South and thereby voicing the concerns of the developing world.
He congratulated Indonesian President Joko Widodo for his effective leadership of the G20, especially in a difficult global environment underlined by Climate change, the Covid Pandemic, and the recent developments in Ukraine. He mentioned the global supply chain disruptions and the resultant challenges for the poor citizens of every country caused due to these disruptions. Hence, he highlighted the relevance of G-20 saying, ‘today the world has greater expectations from the G-20, the relevance of our group has become more significant’.

He reiterated India’s stance on the need to find a way to return to the path of ceasefire and diplomacy in Ukraine and for collective resolve to ensure peace, harmony, and security in the world. PM Modi highlighted India’s effort in ensuring food security not only for its 1.3 billion citizens but also for many needy countries around the globe. He cited the current shortage of fertilizers as being a big crisis in terms of food security. He also emphasized how India is promoting sustainable food practices and re-popularizing nutritious and traditional food grains like millets, especially as we celebrate the International Millets Year next year.
PM Modi underlined India’s energy security as an important matter, especially for global growth and while also emphasizing that by the year 2030, India will generate half of its electricity from renewable sources.
Prime Minister Narendra Modi also attended the 2nd Working Session on Health and later, he addressed over 800 members of the Indian community in Bali where he highlighted the deeply rooted cultural and historical ties that India and Indonesia share. He spoke on how the Hindu deities such as Ram, Krishna, Vishnu, and Ganesh still continue to be important symbols in Indonesia while also mentioning the age-old tradition of Bali Jatra. He highlighted the commonalities between India and Indonesia in various sectors. PM Modi mentioned how the Indonesian community has always welcomed India with an open arm and embraced them into their society.
On the sidelines of the G20 Summit, Prime Minister Modi also had brief interactions with global leaders such as U.S President Joe Biden, French President Emmanuel Macron, Prime Minister of the Netherlands Mark Rutte, Prime Minister of the United Kingdom Rishi Sunak, President of Senegal Macky Sall and World Bank President David Malpass.

Tomorrow the Prime Minister will be visiting the Mangrove Forest of Indonesia along with the other global leaders and will be attending the 3rd and final Working Session on Digital Transformation. He is also set to host several bilateral meetings with his counterparts from Indonesia, Spain, France, and Singapore. Later, Indonesian President Joko Widodo will symbolically hand over the G20 Presidency to Prime Minister Modi for the Indian G20 Presidency.