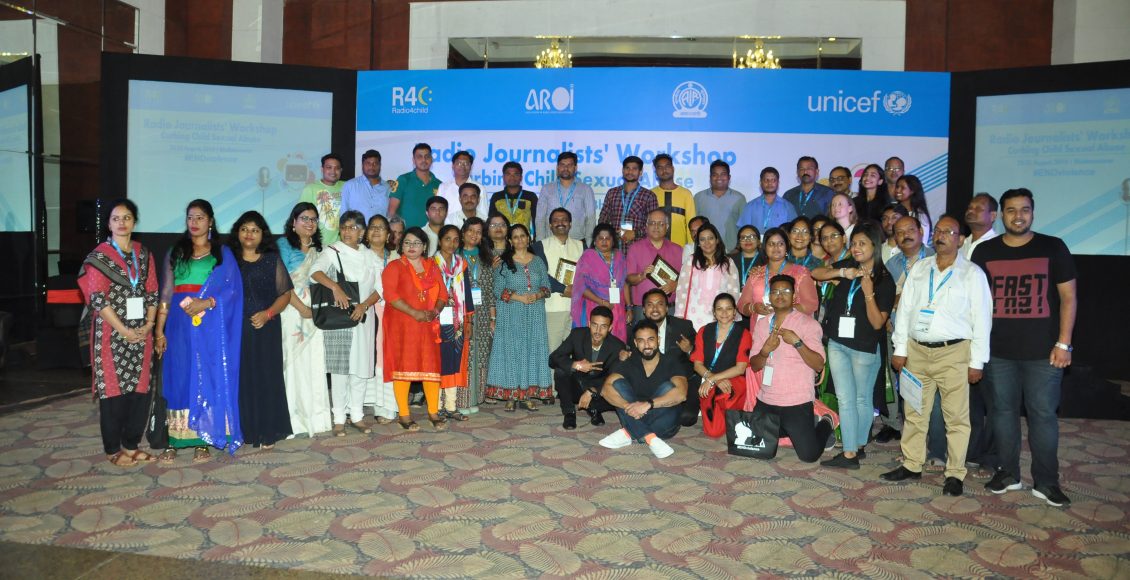 Bhubaneswar: Over 60 radio professionals from Assam, Bihar,Chhaatisgargh, Haryana, Jharkhand, New Delhi, Odisha, West Bengal,and Uttar Pradesh came together in a three-day regional workshop focusing on public health and child sexual abuse, cocreating on-air programmes for prevention of violence against children.The Association of Radio Operators in India (AROI), All India Radio and UNICEF organized the workshop to build skills of radio participants on the nuances of handling sensitive issues relatedto child sexual abuse.The exercise is part of UNICEF India’s initiative for the annual Radio4child Awards in partnership with AROI and All India Radio, to recognize radio journalists who have contributed towards increasing awareness on issues related to immunization and child sexual abuse. Participants were oriented by professionals working in child protection along with representatives from the government, the police and judiciary.Working in groups the RJs created radio programmes, public service announcements, jingles and other products around ending child sexual abuse. The messages reflected the various dimensions of child sexual abuse and focused on spreading awareness about preventive measures, the need of reporting such crimes, punishment and deterrents as well as the importance of trauma care for victims.

The overall message is that prevention of child sexual abuse is possible and is everybody’s responsibility. Highlights included a panel discussion on “Ending Child Sexual Abuse and the Role of key stakeholders such as Judiciary and Police” and a presentation on “Understanding child sexual abuse on the context of violence against children; laws and reporting.”The Odisha Police in collaboration with UNICEF recently activated statewide awareness campaign against Child Sexual Abuse tilted ‘Paree Pain Katha Tiye’ (A word for the little angel).

The campaign from 28 May- 12 June 2018 covered all 30 districts of the state. Speaking at the workshop, Mr.R B Panigrahi, SP Crime, Odisha Police said the crime branch of the Odisha Police treated all cases of Child Sexual Abuse as red flags and gave it the highest priority. Laxmi Narayan, Child Protection Specialist, UNICEF stressed on the need to create an environment of trust for the child abuse survivor within the family and community and suggested that local NGOs, district child protection units as well as the toll free CHILDLINE helpline number 1098 could be approached for support in reporting against child sexual abuse. Dr. Justice (Retd) Durga Prasanna Choudhury, Orissa High Court said that every child has the right to protection, participation, and taking decisions. Media are bound by the Constitution to protect the rights of children. Dr. Sangeeta Saksena from Enfold Proactive Health Trust, Bengaluru, addressing “Curbing Child Sexual Abuse” talked about ways to broach the sensitive topic of child sexual abuse and how the prevention is the most effective strategy to address child sexual abuse. Participants were provided a holistic overview of the POCSO Act that deals with cases of child sexual abuse.