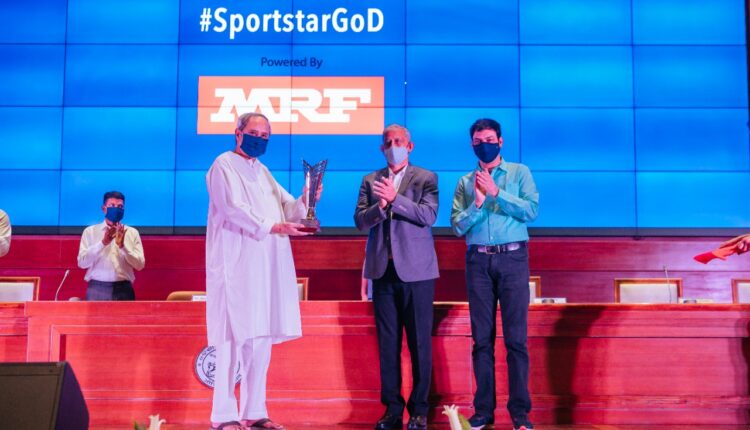 Odisha Government today received the prestigious Sportstar Aces Award, ‘Best State of the decade for the Promotion of Sports’ at an award ceremony in Bhubaneswar, today. Hon’ble Chief Minister of Odisha, Shri Naveen Patnaik received the award from Olympic gold medallist and former India hockey captain, Shri. M. M. Somaya in the presence of CEO of the Hindu Group, Shri. Navneeth L.V, Editor, Sportstar, Shri. Ayon Sengupta, dignitaries and officials of the State Government and The Hindu group.
The Sportstar Aces Awards 2021 celebrated the consistency of performance and the impact of sports stars in the decade between 2011 and 2020, honouring 31 winners across Indian sports in this year’s ‘Giants of the Decade’ special.
The esteemed jury comprised of cricket legend Sunil Gavaskar, Olympic gold medallist and former India hockey captain M. M. Somaya, nine-time national badminton champion Aparna Popat, five time world chess champion Viswanathan Anand, Olympian shooter Anjali Bhagwat and former India football captain Bhaichung Bhutia.
The state has been at the forefront of hosting major sports events, developing world-class infrastructure, supporting all forms of sports, creating a bouquet of High Performance Centres and strengthening its grassroots programs which have collectively contributed to the sustainable and holistic development of the sports ecosystem and has been noted as a ‘Giant of the Decade’.
Accepting the award, Hon’ble Chief Minister, Odisha Shri. Naveen Patnaik, said, “I humbly accept this award on behalf of the people of Odisha and dedicate it to the thousands of sportspersons from the State who work hard every day to bring glory to the State and nation. I also dedicate this to the tens of lakhs of youth of the State with great potential. I call upon them to think big and assure that the State Government will always be there to support them in realizing their dreams and making the State proud.”
“Odisha has been at the forefront of promoting sports of all kinds over the past many years. Its commitment to supporting sports and sports personalities has seen the state host a multitude of international events including the men’s hockey World Cup in 2018 and the Asian Athletics Championships in 2017. Odisha has also set up high-performance centres in collaboration with the best names in sports while also building a robust grassroots sporting infrastructure with its various sports hostels. The honourable Chief Minister Mr Naveen Patnaik has taken a personal interest in sports and his vision has been realised as his team has tirelessly worked towards helping sports. It’s an honour for us to be here and present the award to Mr Patnaik,” said Sportstar Editor, Shri. Ayon Sengupta.
“Odisha has created the environment and access to sport. More important is the work done in the grassroots because, in the end, the champions come up, but they have to start somewhere. Odisha has simply done extremely well in the last few years. It is a part of states’ responsibility, but Odisha takes the time out and do so much for sports and the athletes and that needs to be appreciated,” shared, Chess legend, Viswanathan Anand.
“Odisha has led the movement when it comes to sports in India They’ve not just encouraged sports – they are traditionally good at sports like hockey and athletes – but have contributed to Indian sport in its entirety. The infrastructure that has come up from private and public partnerships is world class. The events they’ve brought in and conducted were a big success. They are looking at grassroots development very seriously as well as sports education and sports science. Overall, they have a very well thought out and executed plan and they keep growing.. Their thinking and investments are for sport in the long term and today,” said, Badminton Legend, Aparna Popat