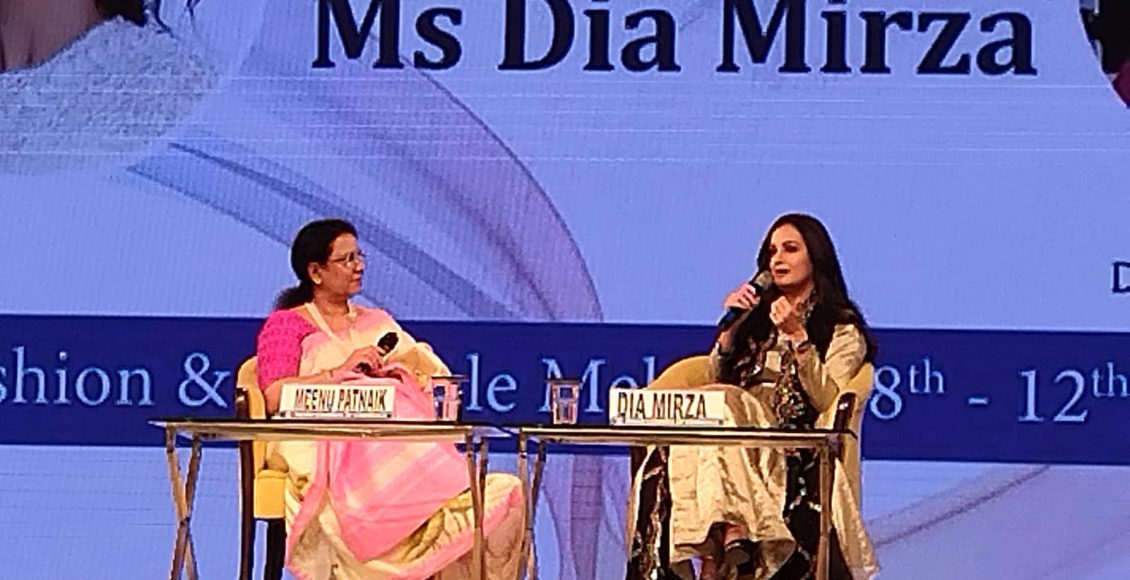 Bhubaneswar: A fashion and lifestyle fair is going on at Patia Paltronics Ground in collaboration with Indian Chamber of Commerce and Women Entrepreneurs Council. Today was the third day of the fair. For the past two days, thousands of spectators have seen the mela premises, but even today there was a crowd that was not there. It showcases the products of SSG, tribal and grassroots entrepreneurs. The theme of the third day’s panel discussion was the reinvention and fusion of textiles and design.While Nitisha Mann and Gargi Bhattacharya participated in it, Baibarshi Nanda managed the stage. Bollywood actress Dia Mirza attended the event as the chief guest. INCWEC with Diya Core member Minu Patnaik conducted an interactive session. Dia Mirza shared her journey and experiences with the audience and also presented awards to entrepreneurs and traders who support handloom. Entrepreneurs had their own opinion on it.A large audience enthusiastically participated in this session. The guest of honor for the evening was I.A.S. and P.R. Poonam Guha, Additional Secretary, A&DW, along with Neesha Mann, Deputy Director, MSME-DFO, visited the stall and shared their views. IWEC Co-Chairperson Sukirti Patnaik thanked the people for their unwavering support to the fair and also thanked the respective guests for promoting handloom through the Pride of Odisha march. Tania Patnaik, convener of INWEC, thanked the designers and expressed support to the craft industry for creating innovative products using handloom. He opined that this program is commendable at the grass root level. The biggest attraction of the day was the Pride of Odisha fashion show. The most successful entrepreneurs, business leaders and achievers of Odisha walked the ramp dressed in handloom garments designed by designer Ramuli. Atuliya showcased their handloom garments through a fashion show supporting thousands of grassroots entrepreneurs working in handlooms and handlooms. Designer Tamasa Mohapatra of Label Fashionista, Designer of Label Tulika Mohanty, Selina Dashan of Label Edge Fashion displayed their ready-made clothes. Similarly, tribal sisters from the state walked on the ramp. The fashion show was organized by Adi Rani Foundation. Another attraction was the dance of Siberan Beriwal. His power packed performance was appreciated by the guests and the audience. The biggest thing is that the fair trended on social media. The atmosphere of the fair is positive and people are enjoying it.