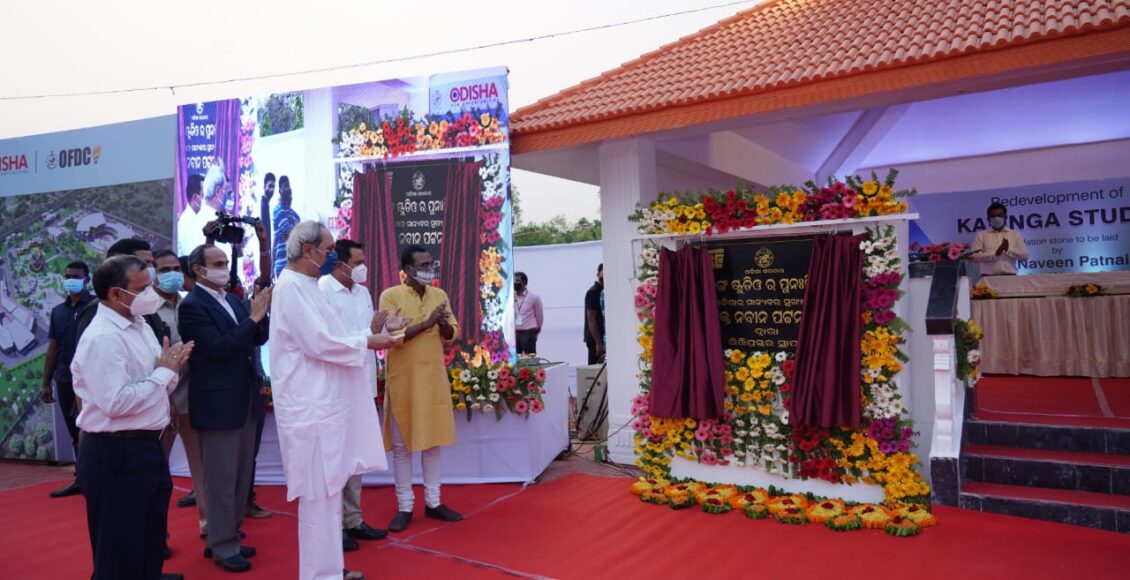 Rs 200 Crore to be Invested,Employment Opportunities For 12 thousand

Chief Minister Shri Naveen Patnaik today laid the foundation stone for the re-development of Kalinga Studio with all the state-of-the-art infrastructure.

With the completion of this project, the Chief Minister said, on the occasion, that the entertainment industry will receive a massive boost promoting art, culture and heritage along with cinema, and also create large scale employment opportunities for the people of the State in film, media, and entertainment industry. The State Government has sanctioned Rs. 200 Crore for the project.The project concept and master plan has been designed by an international consulting firm M/s Grant Thornton Bharat LLP.

The project work will be executed by IDCO and it is expected that the construction and landscaping of the core support area will be completed by December 2022.It envisages direct employment for around 2,000 in film, media, and entertainment sector along with indirect and induced employment generation of more than 10,000.
The studio will be re-developed spreading into three different zones modern infrastructure that includes multi sized indoor shooting halls, make believe shooting locales, theme based parks, post-production facilities such as dubbing and mixing studio, animation work station, editing suite, DI (Digital Intermediate) Studio, preview theatre, directors’ room, space for brainstorming, script narration, casting, recording lab, radio and media houses and many other facilities.Along with film production, the studio proposes to contain comprehensive fun, entertainment, and a leisure hub.The infrastructure includes live performance stage, adventure parks, kids play area, water games, castle view, snow world, iconic points etc along with boarding and lodging facilities for the film crew, and space for social and cultural gatherings.

Established in 1980, the Studio had a significant role in changing the face of Odia cinema. During that period, the Studio was the only Film Studio with all best equipment in Eastern Region of the country.

Further, the creative talent pool of Odisha places itself into a niches market, and the State has produced some of the finest movies in the past.The industry needs to catch up with latest infrastructure and technology in film making.

The objective of the project is to preserve the heritage property of the State and support in upliftment of Odia Film Industry.

The infrastructure will create a film industry eco-system which would help develop not only the Odia Movie Industry, but also cater to many downstream affiliates of the sector in the larger entertainment and creative services industry.The project is also expected to catalyse employment in film media and entertainment industry .Among others, Industries Minister Shri Dibya Shankar Mishra, OFDC Chairman Shri Satybrata Tripathy, chief secretary Sri Suresh Chandra Mahapatra , Industries Principal Secretary Shri Hemant Sharma, IDCO CMD Shri Sanjay Singh, IPICOL MD Shri N B Jawale were present among others. The chief minister also met the senior artists present there on the occasion