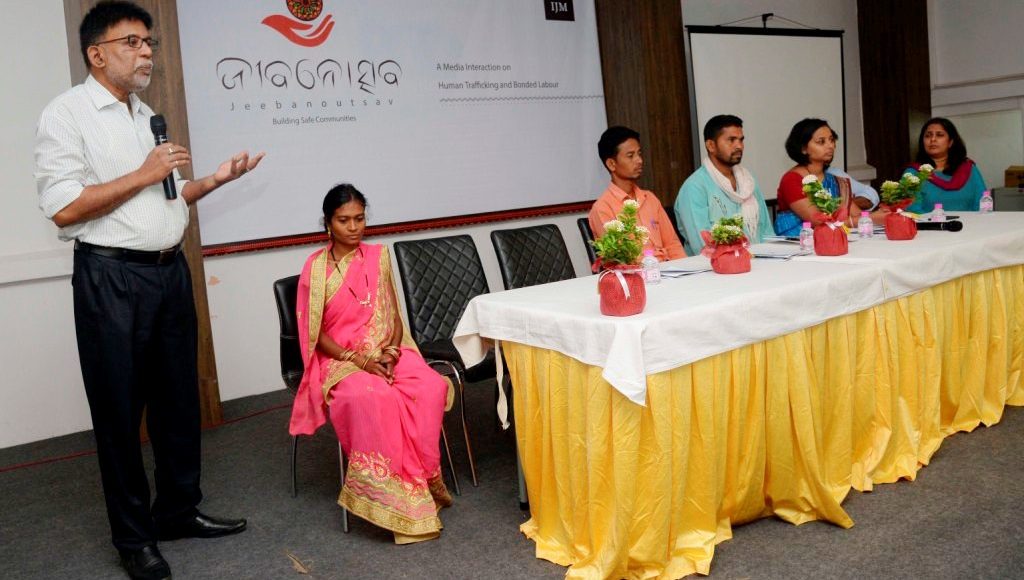 Bhubaneswer : During the media interaction in Bhubaneshwar on “Building Safe Communities” organized by International Justice Mission (IJM), the survivors spoke of the abuse they faced after being trafficked. Victims of unsafe migration from different parts of Odisha shared their stories of bondage and rescue during a special event organized at Bhubaneshwar today.

Panelists and delegates who attended the discussions elaborated on the magnitude of the problem of bonded labour in Odisha, which has become a major source for cheap labour. Lakhs of labourers from the state migrate to various parts of the country every year to work in brick kilns, stone quarries, construction sites and agricultural farms and other unorganized sectors.

“I reached a situation where I had agreed to sell one of my kidneys so that I could arrange means to escape the brick kiln with my family. The blood tests were done. For one last time, I called my parents in Odisha and narrated my ordeal in tears. They somehow managed to reach the labour office and rescued me from the situation,” recounted Ashok Munna, a survivor.

“Community leaders must be empowered so as to address the immediate needs of those who are at a high-risk of ending up in bondage. Efforts must be made to increase their confidence in the government and the local law enforcement officials and mechanisms through a sensitive and responsive grievance redressal process,” said Neenu T, Director, IJM Odisha. Although the Odisha government has different schemes in place to provide protection, education, livelihood opportunities for the victims of bonded labourers, a lot more needs to be done.

The panelists urged the participants and the government to consider the Trafficking of Persons Bill 2018, that was passed by the Lok Sabha during the monsoon session, as a good measure to combat the problem of trafficking for labour in India. The panel also spoke of the Bonded Labour Rehabilitation Scheme (BLR CSS 2016), and the need for systematic and timely disbursement of rehabilitation assistance to released bonded labourer as many of them are still waiting for the cash rehabilitation assistance. Coordination between source and destination states to make migration safer and help prevent instances of bonded labour was also discussed.

The special interaction was a prelude to Jeebanoutsav 2018, a celebration of a 2 year rehabilitation programme that 900 survivors of bonded labour have completed. The celebration event is scheduled to be held in Titlagarh on Friday. IJM’s rehabilitation programme has hosted over 5000 survivors to date by strengthening the hands of district and state public justice system. In Odisha, IJM works in seven districts in western Odisha and has rehabilitated over 5000 survivors of the crime of bonded labour rescued from across the country.