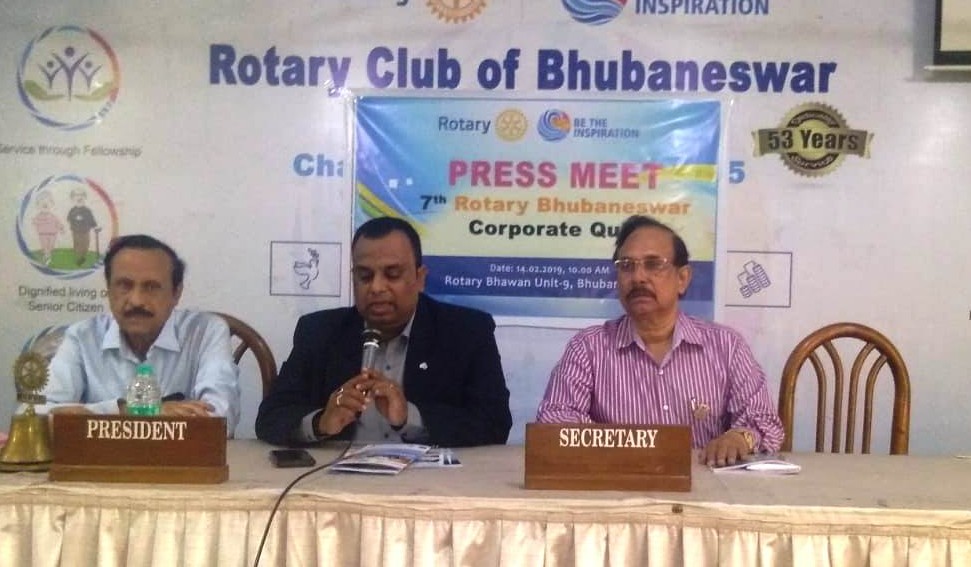 In his deliberation to the press, Rtn. Mohanty, President of Rotary Club of Bhubaneswar uttered that we have conducted six editions of such contest successfully earlier and it is the 7th time we are going to organize Rotary Bhubaneswar Corporate Quiz competition for the corporate honchos. He further told that this event is giving platforms to the private as well as public entities to usher their brand identities through the mode of Brand promotion and creative advertisements. Eventually he said that Rotary Club of Bhubaneswar will spend the amount earned from this event through the modes of sponsorships and participation charges for the social welfare of the community and however this year we expect more number of teams to participate in this contest.

According to the information, entries for 7th Rotary Bhubaneswar Corporate Quiz competition are invited from the Corporate Houses, Business Houses, Educational institutes, PSUs, MSME sector and Govt. undertakings. Each team will be three numbers of members from the institutions who shall participate. However the questions unanswered by the final six will go to the rest of the team present. There would be audience questions to be answered by audience present in the hall. There is a participation fees of Rs. 12,000/- per team and such fees include dinner for the three participants while additional members can join by paying a registration fee of Rs. 600/- only. The participation fee should have to be paid in favor of Rotary Club of Bhubaneswar on or before 28th February 2019 through Cheques/ Demand Drafts. The awards for this competition will confer as cash prizes of Rs. 30,000/-, Rs. 20,000/- and Rs. 15,000/- along with trophy and certificates to the winner and runners up. Last year 17 corporate teams participated in this contest while banners of 23 Corporate Houses were being displayed at the venue. Among those teams IFFCO, Axis Bank and NALCO were managed to bag the prizes at 6th Rotary Bhubaneswar Corporate Quiz.

It has been noted here that “Rotary International” is the largest service organization in the world, having its 113 years of its existence to its credit. Currently it has its existence in 216 countries, having about 35,000 clubs and 12 lakh Rotarians. Rotary Club of Bhubaneswar takes pride in projects like modernization of Capital Hospital and Municipality Hospital Blood Bank. The club has also undertaken the projects like Asha, ROPARS as part of long term sustainable community development programmes. The club has also adopted a village ‘Kalapita’ under Bhagabatipur – II GP of Kantabada block in Khurda district. Rotary Club of Bhubaneswar has provided toilets to the households, free health facilities and health cards to all the villagers. Eventually the club is committed to enrich community livelihoods of the state through various reformations and renovations.

Mobil associates with ‘Vikram Vedha’, the most awaited action thriller