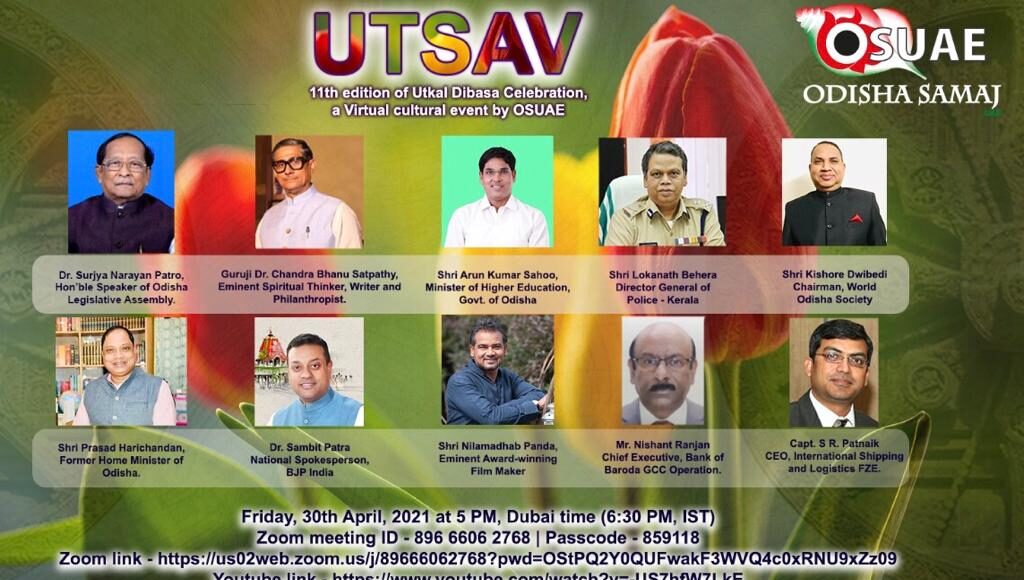 Odisha Samaj United Arab Emirates (OSUAE) is all set to host online Utkal Divas on 30th April 2021 at India time 6.30 p.m. onwards. Entitled as UTSAV, the 11th edition of Annual Day Celebration of OSUAE shall witness the virtual assembly of dignitaries from across the Globe. The video conferencing meeting will be followed by spectacular cultural extravaganza presented by several illustrious luminaries from art world.

OSUAE is the largest association of Non – Resident Odias across the Middle East and North African Region. Established in the year 2010 the Samaj has been regularly organising cultural events like Shree Jagannath Rath Yatra and Shree Ganesh puja in a grand manner and social service initiatives such as Blood Donation and health Check up camps quite successfully.

During the ongoing Pandemic period OSUAE in association with Consulate General of India in Dubai has safely repatriated more than 2000 stranded Odia migrant labourers and their families from Dubai to Bhubaneswar by hiring several chartered flights and through Vande Bharat Mission. The Samaj has also been engaged in providing basic human needs like food and shelter to lesser privileged Odia brethrens at the time of distress.

Utkal Divas celebration use to be the most sought after mega event of OSUAE. The representatives of Odia associations of several countries are expected to participate in this year’s colourful digital jamboori. Both the adult members of OSUAE and their children are expected to showcase their multifaceted talents and creative calibres on the live streaming platform.

The ace anchor Sudhashree Dash shall moderate and present the programmes.