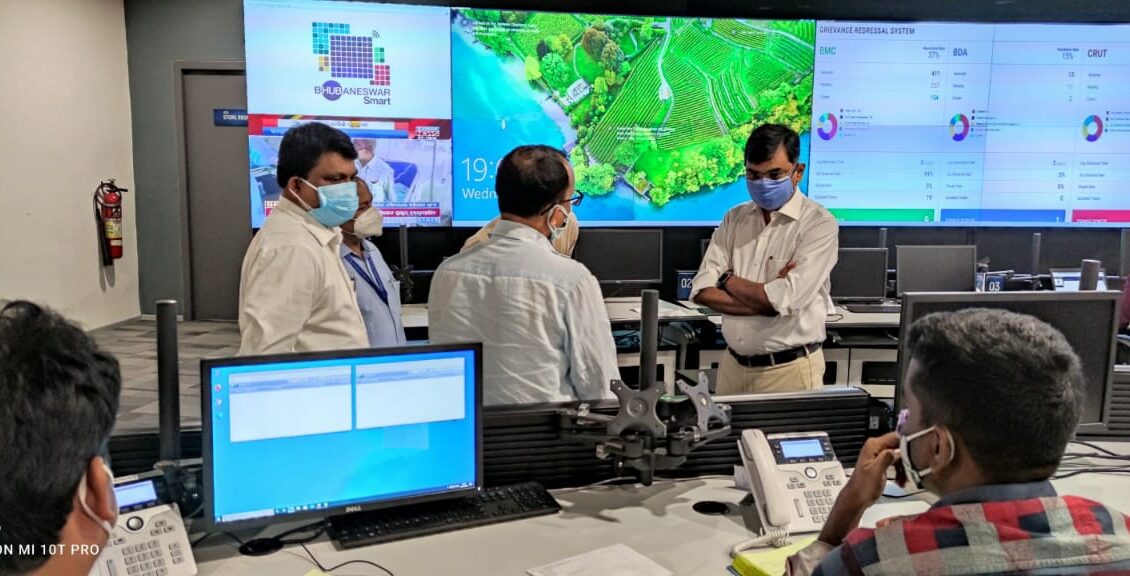 Newly-appointed Chief Executive Officer (CEO) of the Bhubaneswar Smart City Limited (BSCL) and Commissioner Bhubaneswar Municipal Corporation (BMC) Sanjay Kumar Singh visited the 24X7 Call Centre of 1929 this evening and reviewed its functioning.
The CEO and BMC Commissioner wanted to know about the numbers of work stations engaged for incoming calls, outgoing calls and consultation with the doctors. He was briefed that there are 25 work stations currently engaged for incoming calls, outgoing calls and doctors’ consultation at the Call Centre.
After learning about the call pressure and people’s increasing dependency over the 24X7 Call Centre of 1929, the CEO and BMC Commissioner directed to add another five work stations. He also directed that resting facility to be developed for the doctors and Call Centre executives. As per his advice, there will be two different rooms for ladies and gents, respectively inside BSCL office, which will be functional from tomorrow.
The CEO and BMC Commissioner emphasized on improving the functioning of the call centre on the basis of feedback received from people. He advised that there should be minimal call drops and the Call Centre should try to help all who are calling for help.
*HELP DESKS AT COVID HOSPITALS:* The CEO and BMC Commissioner was also briefed about the Help Desks being planned by BSCL to be made functional at various COVID hospitals across the city soon to act as a bridge between the critically ill patients and their family members. As per the new arrangement while six help desk executives will be deployed at SUM COVID Hospital, five will be at KIMS COVID Hospital, three at Hi-Tech COVID Hospital and one each at Aditya-Ashwini and Blue Wheel Hospital respectively.
The executives at the COVID hospital Help Desks will keep updating the status of the critical patients to the family membersso that their family members. The Help Desk executives will be given Smart phones.
*MORE DOCTORS DEPLOYED:* It can be mentioned here that the doctors’ strength at 1929 24X7 Call Centre has been increased. In the morning and afternoon shifts there would be seven doctors each and during night shift there will be four doctors. Earlier there were three doctors in morning and afternoon shifts and two in night shifts. Similarly, in every shift there are 17 call centre executives to manage the calls.
It can be mentioned here that till yesterday, 35,068 outgoing calls were made and 31,334 incoming calls have been received by the call centre. During this period 8,551 consultations have been made by the doctors. The 1929 24X7 Call Centre on COVID by the BMC and BSCL started on March 25 this year.