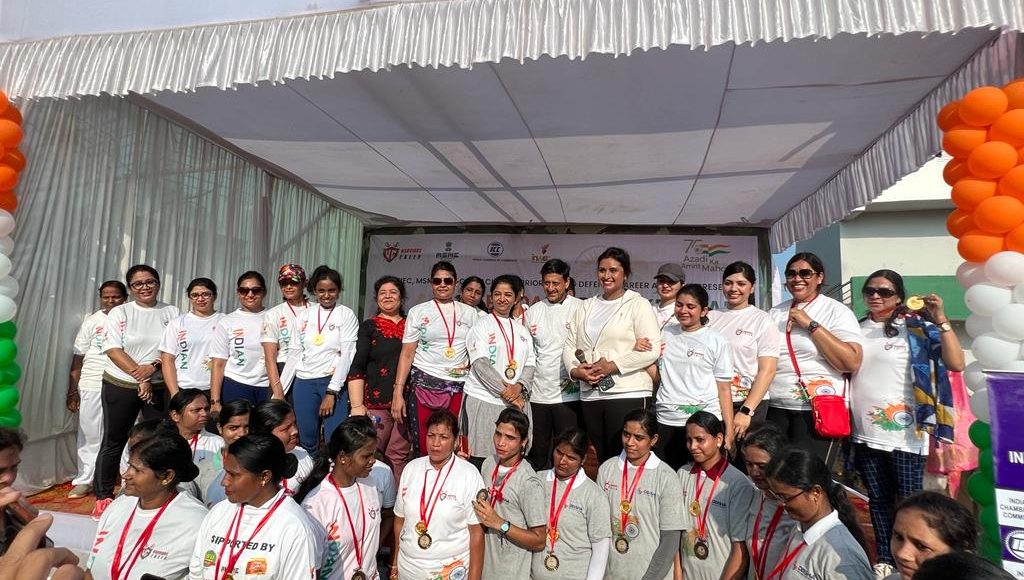 Bhubaneswar, 4/9: The 5 km marathon/walkathon at the Pahal, witnessed an enthusiastic participation among the citizens of the twin city and women entrepreneurs from INWEC.

The event was graced by Shri Dilip Tikrey, Padmashree Awardee, Former MP Rajya Sabha, Shri Siddhanta Mahapatra, Actor, Producer & Former MP Lok Sabha, Shri S K Priyadarshi, Commissioner of Police, Bhubaneswar & Cuttack, Shri P K Gupta, Joint Director & HOO, MSME DFO Cuttack, as chief guests and
Ms Sukirti Patnaaik, Co-Chairperson National INWEC & Convenor INWEC Odisha, Ms Tanaya Patnaik, Co-Convenor INWEC Odisha, Ms Rashmi Sahoo, Core Member of INWEC, Captain Chinmay Nayak, an Army Veteran with the Warriors Creed Academy were the guest of honour. The event started at 5.30am at the Warriors Creed Academy at Pahal with a warmup session followed by the flagging off of the marathon by Chief Guests. The participants enthusiastically completed the 5 kms stretch with several onlookers cheering and supporting the runners. On completion of the marathon, the participants were awarded medals.
The highlight of the event was the participation of women police officers from Bhubaneswar Cuttack. 50 officers were awarded “The Pride of Odisha” medals for their contribution for their service and for providing safety to the women of the twin city area. INWEC also presented INWEC Visionary Leadership Award to Shri S K Priyadarshi. Speaking on the occasion, the guests appreciated the efforts of the organisers for celebrating the 75th Independence and honouring the women police officers. The contribution of the Warriors Creed Career Academy towards preparing men and women for the competitive defence examination. The students of the academy showcased their skills and professional trainings. Ms Sukirti Patnaaik, thanked the Warrior Creed Career Academy, an entrepreneurial venture by Odia entrepreneurs with strong defence background for preparing the next generation of soldiers who defend our country. She also thanked the Shri S K Priyadarshi, Commissioner of Police for his support for the cause and for the dedication of the women officers. Ms Tanaya Patnaik were thanked the police force for their commitment towards a safe environment at the twin cities. She also shared INWEC’s contribution towards promotion of entrepreneurship in Odisha. Ms Rashmi Sahoo highlighted the responsibility of everyone towards celebrating the 75 years of Independence.  Shri Siddhanta Mahapatra energised the entire crowd with his passionate involvement and appreciated the women police officers.

Commissioner of Police Shri S K Priyadarshi shared various initiatives by police force and thanked INWEC and Warriors Creed Academy for recognising the contribution of the women officers. Shri Dilip Tikrey appreciated the participants for reaching early in the morning and participating in the marathon. He interacted with all runners and police officers and awarded several medals.

Shri P K Gupta from MSME DFO and his team participated in the marathon. He expressed government’s support for various entrepreneurial ventures in Odisha and also wished entrepreneurs to explore the various business opportunities and avail government schemes. The event highlighted INWEC’s commitment towards supporting entrepreneurs and also recognising the various pillars of our society. Warriors Creed Academy at Pahal is a premier academy for training candidates for various defence services and other competitive exams. The team is led by a team of veterans from various armed forces. Several students from the academy have joined various branches of the armed forces. The focused guidance and trainings by veterans is a key differentiator and one of the reasons for their success. The entire team helped in organising the marathon and beautifully executed the entire event.